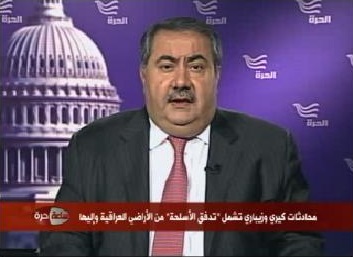 Following his meeting with the Secretary of State John Kerry, Iraqi Foreign Minister Hoshyar Zebari appeared on Alhurra in an exclusive interview to discuss the cooperation between the United States and Iraq in fighting terrorism, Iraq’s stance towards the Syrian conflict, the Iranian influence on Iraq and the situation in Egypt. The following are excerpts of his interview (all excerpts have been translated from Arabic):

On fighting terrorism in Iraq

“We discussed this topic in detail and we suggested some practical measures.  We affirmed to the Americans Iraq’s need for support and help with security, particularly in fighting terrorism, [intelligence] information exchange and building capabilities.  We did not discuss bringing American troops to Iraq, but under the US–Iraqi Strategic Framework Agreement, there is a way to activate the security cooperation to fight Al-Qaeda and its affiliated groups that committed extreme violent actions not only in Iraq but also in the whole region.”

On the potential of a civil war in Iraq

“Iraq is not in a civil war or on the verge of a civil or a sectarian war.  The recent terrorist attacks try to fuel sectarianism and sedition, but they failed because Iraqi people refused to be dragged into that.  In addition, the Iraqi leadership and religious authorities are careful to not fall into this sedition.”

On Iraq’s stance towards the Syrian regime

“We do not support the Syrian regime or any side of the Syrian conflict.  Our stance is independent.  Iraq is not offering any weapons to [the] Syrian [government].  We are extremely diligent in fulfilling our international obligations.  We have received a lot of questions regarding this topic, and we confirmed without any doubt that Iraq has no interest in arming any side of the Syrian conflict. We affirmed to Secretary Kerry today that Iraq’s interest lies in the political solution there.”

On the prospects for the Geneva II conference

“In the light of our discussions with Secretary Kerry, we found that there is a commitment between Russia and the United States to hold a Geneva ll conference maybe in October of this year.”

On Iraq’s relations with Iran

“We discussed with Secretary Kerry in clear detail that Iraq is its own master and does not belong to Iran.  The Iraqi government is not a subsidiary of Iran and is independent in its decision making.  Yes, there is a sort of influence and there are diverse relations between the two countries, but Iraq in fact is not subject to the Iranian influence in forming policies and choosing options at all.  I discussed transporting weapons on [Iranian] flights to Syria over Iraq’s airspace.  We affirmed that the Iraqi government carried out searching operations and we are going to do more in the future.”

On the Egyptian military’s crackdown against protest camps

“We were shocked by the huge number of casualties that resulted from breaking up the protests and by the excessive use of power.  We hope and call for self-restraint and wisdom.  In Iraq, we have had protests and sit-ins for the past 8 months.  The government and the security forces did not break them up in this way except for one incident at Hawija.  We believe in peaceful demonstrations according to the law, therefore we did not take any on the ground measures to break up these protests and sit-ins so far.”

According to international research firms such as ACNielsen, Alhurra has a weekly reach of approximately 26 million people. Alhurra is operated by the non-profit corporation “The Middle East Broadcasting Networks, Inc.” (MBN). MBN is financed by the U.S. Government through a grant from the Broadcasting Board of Governors (BBG), an independent federal agency.  The BBG provides oversight and serves as a firewall to protect the professional independence and integrity of the broadcasters.