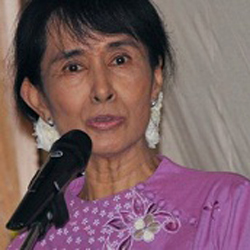 Washington, D.C. – As Burmese voters go to the polls on April 1, the Voice of America (VOA) and Radio Free Asia (RFA) will provide wall-to-wall coverage of a society that until recently has lacked electoral freedom.

“In a place where approximately one in four adults tune in to broadcasts from RFA and VOA, we know our broadcasts play a vital role providing unbiased coverage of these elections,” said Michael Meehan, a member of the Broadcasting Board of Governors, which oversees all U.S. international broadcasting.

VOA and RFA will provide broadcast and on-line coverage, including analysis and reaction to the process, the results, and the impact on the nation and its people.  The multimedia programming includes election previews, reaction from exiles and other features.

The election comes at a key moment for the people of Burma: President Thein Sein has been making reforms, including freeing political prisoners, easing press restrictions, and engaging with opposition leader and Nobel Laureate Aung San Suu Kyi.

VOA has dispatched correspondent Daniel Schearf to Burma to file election coverage from Kawhmu outside Rangoon, where Suu Kyi, a life-long activist on behalf of democracy, is seeking one of 48 parliamentary seats.  VOA Burmese reporter Kyaw Kyaw Thien also is headed to Burma to cover the election and the post-election climate.

RFA’s  reporters on the ground include one attached to Suu Kyi’s campaign. This weekend, RFA will be in Naypyitaw, the Burmese capital, as the votes are counted — and with Suu Kyi as she awaits results. RFA Burmese has provided coverage of candidates, government officials and opposition leaders in the run-up to the vote.

VOA broadcasts 25 hours of radio and three hours of TV per week into Burma, while RFA provides 21 hours of radio and  2 ½ hours of television.   More than half of all adults in Burma own and watch terrestrial TV weekly.  A similar number own and listen to radios.

For more information about the RFA and VOA coverage of the Burmese elections please contact: