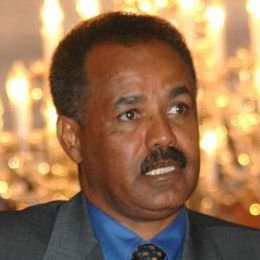 Eritrean President Isaias Afewerki has granted an exclusive interview to VOA’s English to Africa reporter Peter Clottey, who questioned the president about restrictions on the media and the east African country’s reputation for being closed to foreign journalists.

President Isaias Afewerki said he will do what is necessary to “protect national security” in the face of what he calls “external aggression” by those who take money from outside governments to create chaos and spread misinformation.  He denied his country stifles freedom of speech and he said his government is not interested in keeping people from expressing their views.

“This is not a matter of freedom of expression. This is a matter of sabotage – organized sabotage by individuals hired by intelligence agencies from outside,” Afewerki told VOA.
Earlier this month, the Committee to Protect Journalists listed Eritrea as the most restricted country in the world for journalists.  In its annual survey, CPJ referred to the east African nation as “completely closed” to foreign journalists, saying only tightly controlled state media are allowed to operate there.

In his wide ranging interview with VOA, President Afewerki said he has succeeded in building up Eritrea’s infrastructure and decreasing its reliance on foreign aid in the nearly 20 years since he came to power.  Afewerki, who has ruled Eritrea since 1993, said he is more interested in building up his country than embracing what he called the “so-called” tenets of democracy.
Visit the Africa page at www.voanews.com for more news and information about VOA programs to Africa.