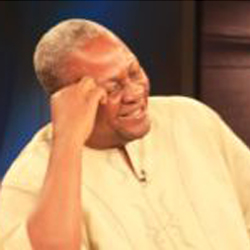 The vice president, who also reflected on memories from his childhood, was in Washington to discuss his new book, “My First Coup D’Etat.”  The book focuses on his coming of age during a coup in 1966 in post-independence Ghana, and the country’s tumultuous political history.

“I wrote this book about the lost decades of Africa, not much has been written about this time.  More of my generation should write about it,” Mahama says.

He used a personal anecdote of the archetypal village bully to relate his experience to the era when most African countries came under military rule.

​​It was the second time Mahama sat down for an interview with Ssali on the hour-long program.  This time he discussed his administration’s efforts to manage the country’s debt, government contracts, and the importance of maintaining the safety and integrity of the upcoming elections.

“Leave when the applause is the greatest,” he says, attributing the advice to his father, who he says was the inspiration behind the book.

The interview ended on a light note, with the host and Mahama joking about how the vice president broke the ice with his first girlfriend: “Hello, I like you 99.9%,” were the words he used as an introduction.

“He is one of the best newsmakers that I have so far had the privilege and the honor to interact with,” says Ssali, who describes the vice president as genuine and sincere and who compellingly tells the story of Ghana and the entire African continent in his book.