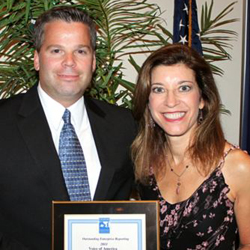 Three VOA journalists have been honored for the second time for a powerful story about a victim of the September 11, 2001, terrorist attacks.

Their report, The Falling Man, is based on one of the most controversial images from the September 11th 2001 terror attack in New York.  Earlier this year the report won the Chesapeake Associated Press Broadcasters Award for Outstanding Enterprise Reporting.

“We wanted to find unique angles of 9/11 that haven’t been covered” said Presutti. “I found a picture that really spoke to me. It was a photo of a man who had jumped from the World Trade Center,” said Presutti.

More than a decade has passed since the terrorist attacks, but the images from New York’s World Trade Towers still haunt many people.

“The photo we used appeared in several newspapers the day after 9/11 and because of public outrage it was pulled, because we were so sensitive to what had happened to us, we were filled with anger and all kinds of emotions,” said Presutti.

Most people who are connected to the photo have refused to talk about it, but Presutti, Burke and Kornely managed to interview people close to the victim, including his sister, and capture the story of the photo.

“This video was made without fancy visual effects because it aims to draw viewers’ attention to the content rather than the production,” Kornely said. “In this video, photography is used in the service of journalism.”

The Clarion Awards from the Association for Women in Communications honor excellence in more than 100 categories in the field of communications.

The Chesapeake Associated Press Broadcasters Association presents annual awards to radio and television stations in Maryland, Delaware and the District of Columbia for outstanding work in various categories. This is the fourth consecutive year that Voice of America has won an award from the association.