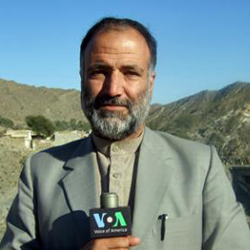 Washington, D.C. — The Broadcasting Board of Governors (BBG) today announced the winners of the 2012 David Burke Distinguished Journalism Awards for exceptional integrity, bravery, and originality in reporting.

VOA’s Aatif was honored, posthumously, with the Burke Award for his dedication to delivering accurate, honest coverage for Deewa Radio of a dangerous tribal region of Pakistan. On January 17, Aatif was attending evening prayers in a mosque near his home when he was killed by Taliban militants. According to VOA Director David Ensor, Aatif “had been threatened many times, but he refused to stop doing what he believed in.”

Caballero of Radio and TV Martí was given the award for her coverage of the “Lights of Liberty Flotilla,” a small group of boats with a mission to sail across the dark and hazardous Florida Strait to just outside Cuban waters to set off a fireworks display. The event sought to draw attention to the solidarity between Cuban exiles with those residing on the island and to human rights abuses by the Cuban government.

Mahsud of RFE/RL’s Radio Mashaal is one of the most prominent journalists in the Pashtun tribal area of Pakistan and received the Burke Award for his coverage of events there. When Shiite pilgrims in three Afghan cities were attacked by suicide bombers in December 2011, Mashud not only broke the story, but was the first to identify Lashkar-e-Jhangvi al-Alami as the Pakistani group claiming responsibility for the attacks.

RFA’s Korean Service earned a Burke Award for its “proactive efforts and outstanding teamwork” in covering the death of North Korean leader Kim Jong Il in December 2011. The Korean Service employed a 24/7 emergency staffing plan to report on developments taking place in D.P.R.K. and to provide perspectives from the international community, media outlets, North Korea experts, and defectors.

Bourogaa and Moawad were recognized for their coverage of the clashes in Libya for Radio Sawa. In one instance, Moawad was traveling on a boat between Misrata and Benghazi when it was shelled by Qadhafi militants. Despite such incidents, Bourogaa and Moawad continued to provide outstanding reports from the frontlines of the fighting in Libya, giving listeners eyewitness accounts as history unfolded in Libya.

“The Burke awards honor people who have distinguished themselves through extraordinary talent, hard work, and — above all — dedication to the highest standards of journalism,” said Michael Lynton, the BBG’s presiding governor.  “We are proud of the work of all our media professionals, but there is extra pleasure in recognizing superlative efforts.

“Sadly, one of our honorees is being recognized posthumously; we will never forget the courage of VOA’s Mukarram Khan Aatif, who paid the ultimate price for his pursuit of the truth.”

The Burke Awards, named for David Burke, former chairman of the BBG, are given by the Board annually to journalists from BBG organizations. The winners will be recognized in a formal ceremony later this year.

The Broadcasting Board of Governors is an independent federal agency, supervising all U.S. government-supported, civilian international broadcasting, whose mission is inform, engage and connect people around the world in support of freedom and democracy. BBG broadcasts reach an audience of 187 million in 100 countries. BBG networks include the Voice of America, Radio Free Europe/Radio Liberty, the Middle East Broadcasting Networks (Alhurra TV and Radio Sawa), Radio Free Asia, and the Office of Cuba Broadcasting (Radio and TV Martí).