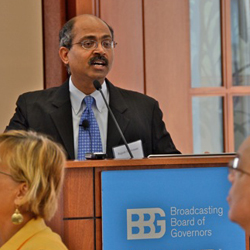 Washington, D.C. — Word-of-mouth networks are the most trusted sources of information in Tibet, and are key to extending the reach of Radio Free Asia and the Voice of America in the region, according to new data issued by the Broadcasting Board of Governors (BBG) and Gallup.

“Individuals who function as ‘information nodes’ spreading news and information throughout their communities are of critical importance to U.S. international broadcasting,” said Bruce Sherman, the Director of Strategy and Development for the BBG.

The BBG, in partnership with Gallup, presented the findings about Tibetan sources of news and information from a survey of Tibetan travelers gathered during the Dalai Lama’s recent Kalachakra teachings in Bodhgaya, India.

The new data shows that Tibetans are spreading news and information that they hear from RFA and VOA with others in their community on a regular basis. The study said Tibetans take pride in sharing the news, and they share it actively within their trusted social circles. While 89% of Tibetan travelers surveyed had televisions in their homes, none considered any official Chinese state media outlet their main reliable news source. Nearly three quarters (74%) say other people are their top source for reliable news. Asked to name up to three reliable sources of news and information, 94% named word-of-mouth sources.

The findings were gathered by Gallup during face-to-face interviews with 117 subjects reached during the Dalai Lama’s recent Kalachakra teachings in Bodhgaya, India, between December 25, 2011 and January 15, 2012. Respondents included travelers coming from Amdo, Kham, and Utsang regions of Tibet.

“Gatherings such as these provide us with a unique opportunity to understand the changes that are taking place in how Tibetans access and share news amongst themselves,” said  Rajesh Srinivasan, Principal Researcher at Gallup.

The study also shows new possibilities for mobile phones and other digital media for disseminating news and information. Texting has become a common mode of communication in Tibet, with more than  four out of 10 (44%) of those surveyed reporting that they had sent or received texts on their mobile phones.

The BBG’s global audience research program is conducted in partnership with Gallup and is a valuable informational asset for the current and future operations of the agency’s broadcasts in 59 languages to more than 100 countries.

Today the BBG broadcasters offer around-the-clock coverage of events of interest to Tibetans, including shortwave services seven days a week, audio programming by satellite, television broadcasts, and online content.  RFA and VOA have been leaders in covering the ongoing crackdown on Tibetan protests, as well as political, religious and human rights developments affecting the Tibet Autonomous Region and Tibetan Autonomous Prefectures.