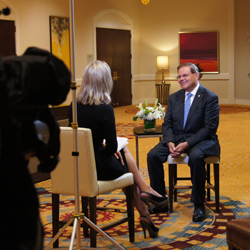 “I will continue to promote liberty for all Cuban citizens, and continue to deliver the message of solidarity between the U.S. and the people of Cuba while not condoning the Castro Regime,” the Cuban-American lawmaker said, speaking to in Spanish.

During the interview, Menendez assured the Cuban people that the United States stands behind them and will support and help Cuba’s human rights activists.

Menendez is the Chairman of the Senate Foreign Relations Subcommittee on Western Hemisphere, Peace Corps and Global Narcotics Affairs. On June 7th, three Cuban dissidents testified before the subcommittee via video teleconference from the U.S. Interest Section in Havana.

One of the participants was arrested and beaten after his testimony. Menendez said he had warned the dissidents of the risk that their testimony may cause and was taken aback by their courage. According to Menendez, they said, “Senator, we are used to risking our lives every day in the dark, here the world will hear what we have to say.”

Menendez said he pushes the cause of solidarity with the people of Cuba in discussions with world leaders: “I always ask, why don’t you oppose human rights violations in Cuba?…Why don’t you support human rights and respect in Cuba and support and promote liberty for Cubans and support them and welcome them at your embassies?” he said.

“We always want to help the Cubans and we feel the pain of the divided Cuban family,” Menendez said.