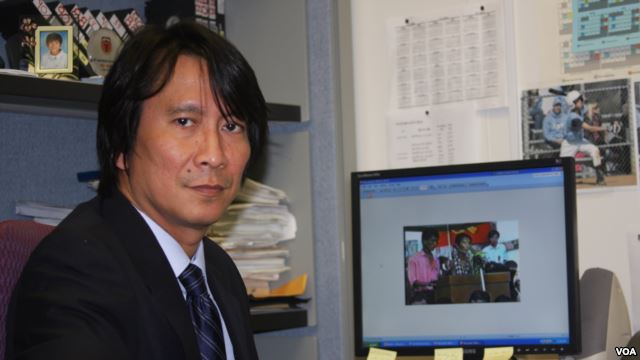 VOA’s Than Lwin Htun and other well-known Burma specialists were on hand for the release of a U.S. Institute of Peace report on the developing media landscape in Burma.

Lwin, the head of VOA’s Burmese Service, was a member of the assessment team for the project, which included a trip to Myanmar in the spring of 2013, where they interviewed local journalists, media experts, and other specialists.

The report, titled Media and Conflict in Myanmar: Opportunities for Media to Advance Peace, was released on January 23 at a panel discussion at the USIP headquarters in Washington.  The panel included Lwin and other experts from the Asia Society, USAID, and USIP.

“By trying to understand different views on the current media situation inside Burma, we can help determine what can be done, through media, to reduce tensions countrywide,” Lwin said.

Lwin and other project team members made several recommendations in the 40-page report, including creating a participatory talk-show format program for community members to voice their opinions and concerns about key issues.

“I’m quite pleased to have been a part of this important report, at a time when the country is transiting from one of the world’s most repressive media environments to a government more and more accepting of press freedom,” Lwin said.

Lwin, who has covered Burma as a journalist for more than 30 years, fled the country in the wake of the military crackdown on pro-democracy demonstrators in the late 1980s.