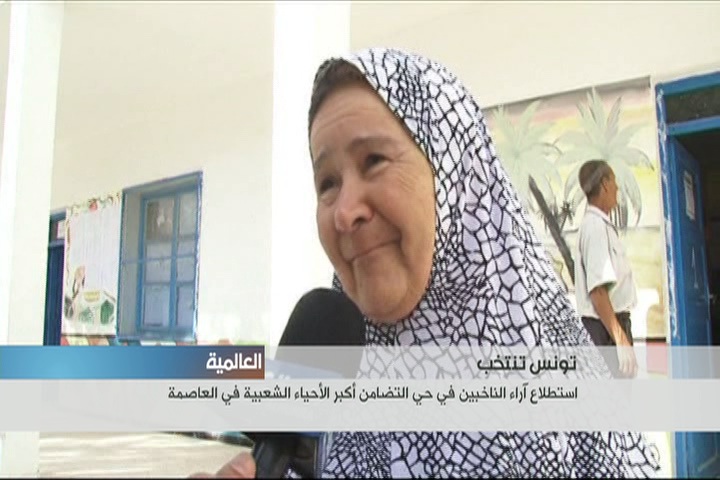 On October 26 Tunisians went to the polls to participate in Parliamentary elections, and Alhurra provided extensive live coverage throughout the day. This was the first election since the Tunisian Constitution was ratified earlier this year and the second Parliamentary vote since the “Arab Spring” revolts in 2011.

Alhurra’s continuous coverage began at 7:00 A.M.  local time and included live reports from correspondents in Tunisia, covered the electoral process and expectations for the high voter turnout.  Additionally, Alhurra’s flagship discussion program Free Hour was expanded to two hours and hosted prominent figures from an array of Tunisia’s political parties and analysts. Guests debated whether the Islamist Ennahda Party had ruled democratically since they have been in power. During the program, when it became clear that the secular Nidaa Tounes Party was headed towards victory, the focus of the program then changed to examine the post-election political arena.  The guests also discussed whether the Ennahda Party would survive or struggle in the coming years, following the fate of the Muslim Brotherhood in Egypt. After the election results were officially announced, Free Hour hosted political analysts to highlight the future of Tunisian politics and what this means for the upcoming Presidential election in November.

In the days before Tunisians went to the polls, Alhurra had interviews with both the Tunisian Prime Minister Mehdi Jomaa and the Tunisian Foreign Minister Manji Hamdi as they talked about the expectations for the elections.

Radio Sawa’s coverage included interviews with members from the Ennahda Party, the Nidaa Tounes Party, the Tunisian Party Petition, Tunisian Democratic Movement Party, Tunis Appeal Party and the Tunisian Renaissance Movement, and Sawa Magazine took to the streets of Tunisia to interview citizens about their hopes for the Parliamentary election. The radio network also spoke with the president of the Electoral Commission in Tunisia to discuss the voting procedure for the election.

Following the announcement that Nidaa Tounes had won a majority of the seats in Parliament, Sawa Magazine interviewed Tunisian analysts and a journalist who profiled the political group.  Samir Delow, Tunisia’s Human Rights Minister, also joined Radio Sawa to discuss the election results.

MBN Digital followed the developments minute by minute, updating polling results, and curating Tunisians’ reactions on social media platforms. Alhurra.com’s post on the election coverage reflected the television network’s live reporting of the event and utilized information and details provided by reporters on the ground in Tunisia. In addition to embedding of tweets and social media reactions, MBN Digital created a slideshow of exclusive images from polling centers.