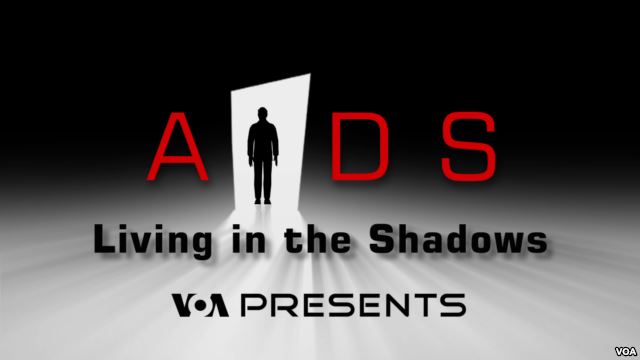 WASHINGTON, D.C., April 16, 2015 –The VOA documentary AIDS: Living in the Shadows won the Silver World Medal at the 2015 New York Festivals International Television & Film Awards.
The 30-minute-long documentary, introduced by the British music legend and longtime AIDS activist Sir Elton John, takes a global look at one of the most daunting side effects of AIDS: the stigma that makes its victims outcasts even within their own families.
Living in the Shadows brings audiences on a journey to Nigeria, Cambodia, Haiti, Uganda, Canada, and the United States to meet those living with HIV and AIDS. In each place, one message comes through: Though the scientific community has made great medical advances, science can’t cure the way AIDS stigmatizes its victims. Solving that problem, the documentary makes clear, will require a change beyond the scope of medicine, a change that permits people to see AIDS victims as fellow human beings.
“It’s very exciting for the documentary to be recognized by our peers,” says Beth Mendelson, VOA’s Senior Executive Producer of Special Programming and Documentaries, “the message about the stigma of AIDS clearly resonated to a global audience.”
Besides AIDS: Living in the Shadows, two other VOA productions were honored at this year’s New York Festivals Awards. VOA’s Ebola Coverage and  Beyond Category with Eric Felten won Finalist Certificates.
For more information about this release, contact the VOA Public Relations office in Washington at (202) 203-4959, or write to publicrelations@voanews.com. For more information about VOA, visit the Public Relations website at www.insidevoa.com, or the main news site at www.voanews.com.
VOA reaches a global weekly audience of more than 172 million people in nearly 50 languages. VOA programs are delivered on satellite, cable, shortwave, FM, medium wave, streaming audio and video and more than 2,350 media outlets worldwide. It is funded by the U.S. Congress through the Broadcasting Board of Governors.