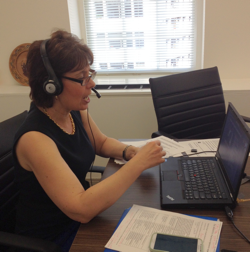 Inna Dubinsky, The BBG Office of Development & International Media Training, led a Skype training session with Russian journalists in Moscow, July 1-2, 2014. The Skype session was organized and hosted by the Eurasia Foundation in Washington, DC.

Fifteen journalists from major TV, radio, print and online media outlets across Russia, including a VOA stringer in Moscow and Irkutsk alumni of the Eurasia Foundation Fellow at VOA, participated in the seminar.

The three-hour session was a part of the seminar organized by the Moscow Department of the Union of Journalists in Russia, Champaign-Urbana Immigration Forum, International NGO“TONG JAHONI” (works with minorities and migrants) with the support of the All-Russian Congress of Ethnic Journalism “Culture of the World”-“We are Russian!” and the international project of the Eurasia Foundation (in the U.S.) “The Exchange of the social experience and knowledge.”

Inna talked to journalists about the U.S. media coverage on migration, principles of journalism and FOIA. In the interactive discussions and case studies, journalists watched and analyzed the VOA English and Russian Service, and the U.S. mainstream media recent reports on migration and detention of undocumented children at the U.S.-Mexico border, and the U.S. Administration efforts to address this issue. The seminar participants noted the ethical, fact-based and impartial coverage of migration issues by VOA. Use of social media as a journalistic tool was also discussed. The conversation covered benefits, challenges, and rules of using the social media to engage audiences.

In the Q&A at the end of the Skype training session, Russian journalists requested further contacts with the BBG trainer and permission to seek her advice and ask questions on journalism via e-mail.