Washington, D.C. — BBG networks provided audiences with special programming in commemoration of International Human Rights Day which came on December 10th. The day marks the anniversary of the United Nations General Assembly’s 1948 adoption of the Universal Declaration of Human Rights.

RFE/RL’s Radio Mashaal examined the rise in violence against women in Pakistan and Afghanistan, featuring interviews with human rights groups and women’s rights activists. It also reported on the achievements of women activists in Afghanistan and Pakistan participating in the global “16 Days of Activism against Gender-Based Violence Campaign,” and reported on the rise in honor killings in Pakistan, based on reporting by the Human Rights Commission of Pakistan.

RFE/RL’s Radio Free Afghanistan (known locally as Radio Azadi) covered events organized by the Afghanistan government, United Nations, and other local and international organizations. The service also reported on the overall human rights situation in the war-torn country, including a profile of a victim of human rights violations and the challenges they face. It also examined the dozens of local and international organizations working for human rights in Afghanistan and whether their work is having any impact in a country where the number of human rights violations continues to rise.

Alhurra’s Al Youm aired a week-long series of reports on human rights’ violations in the Middle East. The series focused on the violation of the rights of women and children in ISIL-held areas of Iraq and Syria. It also explored forced and child marriages, female mutilation, violence against women and the right of refugees to education.

Alhurra news reported on the human rights organizations working in Egypt following passage of a new law that governs the work of non-governmental organizations. From Tunisia, Alhurra covered a sit-in demonstration in front of the parliament in solidarity with those who were imprisoned for participating in recent protests, five years after the revolution.

In addition to news reports, Alhurra aired “Saving Face,” a documentary exposing the brutality of extreme physical abuse by acid attacks against women in Pakistan.

Alhurra’s website also produced an informational video on the UN Declaration of Human Rights, and a story on Arab countries with the worst human rights records.

In its coverage of Human Rights Day, Sawa Magazine marked the occasion by highlighting stories about human rights violations in Turkey and four countries in the Middle East. The magazine also reported on women and children’s rights in Iraq under the ruling of armed extremists and the absence of effective law enforcement.

VOA’s Turkish service aired a number of interviews as part of it Human Rights Day coverage.

Radio Free Europe/Radio Liberty’s Radio Farda created three special features to complement their regular coverage of human rights issues. As part of their programming, Radio Farda assessed the most important human rights violations committed by the Iranian government, including executions, prisoners of conscience, freedom of expression and the media, and discrimination against ethnic groups and other minorities, particularly members of the Bahá’í Faith.

Radio Farda also aired a roundtable discussion on human rights in Iran, as well as a live call-in show featuring prominent former prisoner and human rights activist Mohammad Nourizad and other civil society activists who interacted with listeners from inside Iran and internationally.

VOA Persian spoke to notable human rights experts and organizations, such as Mahmud Bilgin, from the South Azerbaijan Democratic Party who discussed his thoughts on whether Iranian President Hassan Rouhani has lived up to his presidential campaign promises to end political and cultural discrimination of ethnic minorities in Iran.

Another VOA Persian package centered on the plight of Iranian student activist and civil rights defender Arash Sadeghi who is currently serving a 19-year prison sentence for his peaceful activism.

From Morocco, Radio Sawa aired a story about the street vendor recently killed by a local authority official which triggered major protests.

The radio station also reported on the assassination of writer Nahed Hattar, a crime which has highlighted human rights issues in Jordan.

Both VOA Russian and VOA Ukraine covered the latest U.N. resolution on the human rights situation in Ukraine which has documented information based on interviews with 176 witnesses and victims. The Ukrainian Service show Bogdan Globa also aired an interview with a leading LGBT activist in Ukraine.

RFE/RL’s Ukrainian Service asked “What Human Rights Are Most In Need of Protection in Ukraine?” during a series of interviews with human rights activists and experts linked to the anniversary and the Universal Declaration of Human Rights. The Service also posted a short video history explaining why the Universal Declaration was created, as well as a photo gallery showing how those rights are being implemented in real life.

A web report from VOA Armenian featured comments by U.S. Ambassador Richard Mills on the current human rights situation in Armenia. The service also produced a video report on the subject which was posted on its website.

VOA’s Georgian service posted web and radio reports about the living conditions of Internally Displaced Persons in the South Ossetia conflict zone. The report says the government is not doing enough to meet their basic needs.

RFE/RL’s Georgian Service interviewed Georgia’s Public Ombudsman, Ucha Nanuashvili, as well as the EU Ambassador to Georgia, Janos Herman, and NGO leader Gia Jvarsheishvili on the rights situation in the country and the challenges that remain.

RFE/RL’s Azerbaijani Service covered an NGO event devoted to the anniversary in Baku, where participants including Social Alliance head Oktay Gulaliyev noted that the human right situation in the country “has deteriorated in the last year. The government has refused to comply with its international obligations in this area.”

A report on VOA Azeri featured an interview with the father of Bayram Mammadov who was convicted on heroin charges and sentenced to 10 ½ years in prison, after he wrote political graffiti on the monument late president Haydar Aliyev.

VOA’s Mandarin service had a live TV discussion on the deterioration of the human rights situation in China in 2016 with Fengshuo Zou, Founder of Humanitarian China and Teng Biao, Chinese human rights lawyer and visiting scholar at Harvard. While RFA Mandarin TV covered activities planned by Amnesty International in Hong Kong, as well as, recent moved by government authorities to tighten controls on dissidents and rights lawyers.

RFA Tibetan broke the story about a self-immolation protest of a Tibetan man protesting Beijing’s rule. The man’s wife and daughter have been detained by Chinese authorities. The story was also covered by all of RFA’s China language services.

RFA’s Uyghur Service covered a conference calling for the release of jailed Uyghur scholar Ilham Tohti. Despite international calls for his release, Tohti has been held since 2014 and was recently sentenced to life imprisonment. The Beijing-based scholar was outspoken about economic and human rights injustices but widely regarded as a moderate voice of Uyghurs in China.

The Office of Cuba Broadcasting prepared special coverage on Human Rights Day with a section of its website dedicated to its commemoration. Reporting on Martinoticias.com featured articles on NGOs and other organizations working to promote human rights.

Images and captions showing how those rights are being implemented in real life. (Ukrainian)

“Which human rights in Ukraine are most in need of protection?” (Ukrainian)

“The government does not fulfill its commitments on human rights” (Azerbaijani) 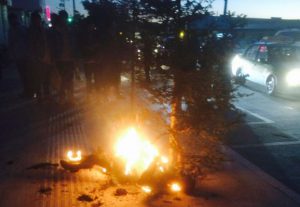