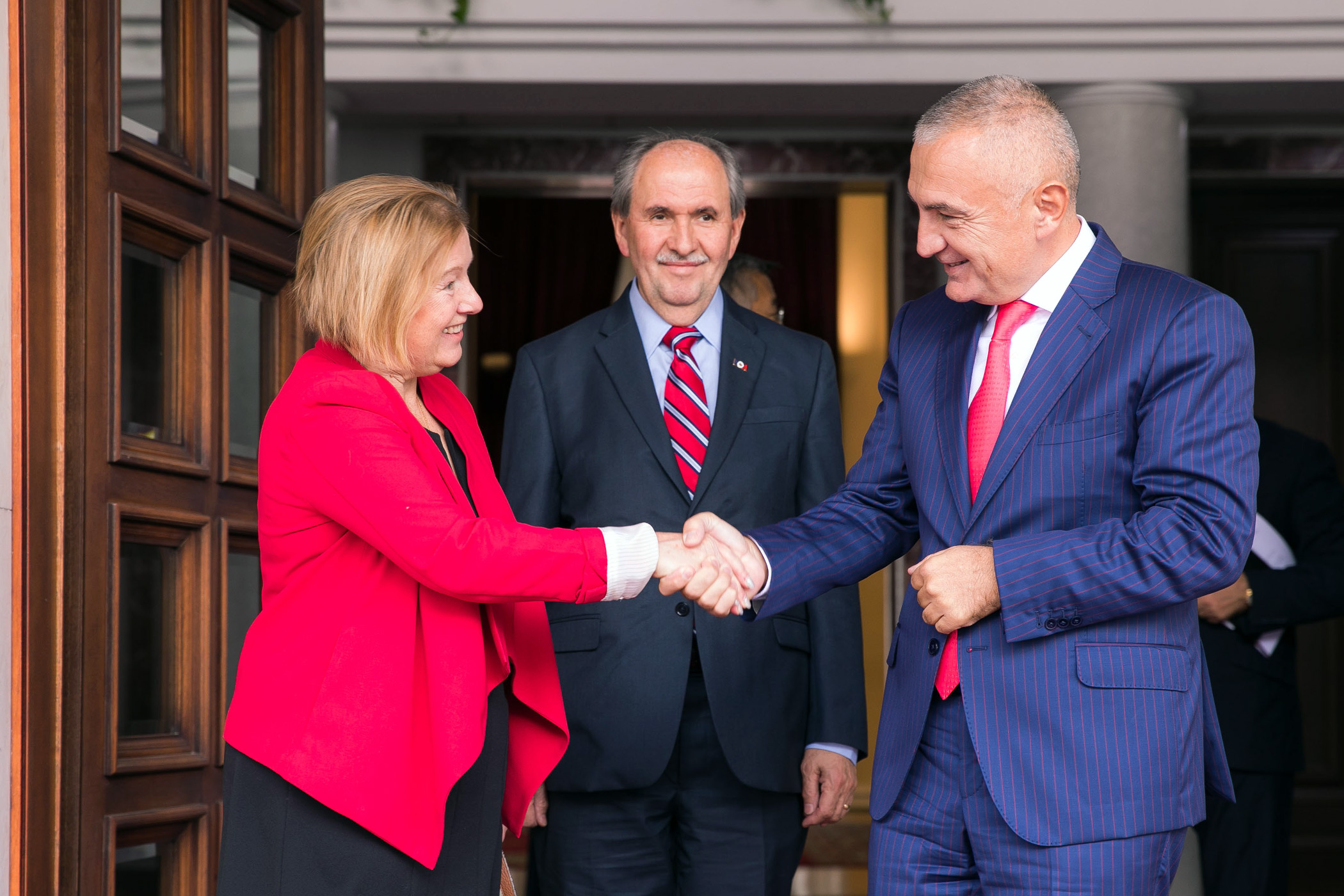 The Voice of America’s role as a source of unbiased and objective news and a model for regional media was the primary theme of VOA Director Amanda Bennett’s recent trip to the Balkans. Director Bennett is the 29th VOA director and the first in the agency’s 75-year history to visit the region.

Bennett met two presidents—Filip Vujanović of Montenegro, and Ilir Meta of Albania and three prime ministers—Ana Brnabić of Serbia, Edi Rama of Albania, and Ramush Haradinaj of Kosovo. She visited with and was interviewed by journalists at nine VOA affiliates, delivered a major speech at the European Union’s Media Literacy conference in Sarajevo, Bosnia, conducted two town hall meetings with students, journalists, diplomats and politicians and participated in two roundtable discussions with groups of prominent women in Tirana, Albania and Pristina, Kosovo.

In Montenegro, President Vujanović awarded his nation’s premier honor, the National Award of Recognition, to the Voice of America. “With great pleasure, I am awarding this National Award to the Voice of America, one of the most respected global multimedia [brands]… for its professional and constructive reporting in our language during the past 75 years,” Vujanović said at a ceremony Monday, September 25, in Podgorica.

Serbian Prime Minister Brnabić “reaffirmed the enduring relevance of free media based on the codes and canons of journalism, which can also foster a constructive dialogue and play an important role in every society,” according to a statement released by the prime minister’s office after meeting with Director Bennett. In Albania, President Meta praised “Voice of America’s contribution to keep the hopes for freedom and democracy alive even in the darkest period of communist isolation of Albania and the inspiration that Voice of America has provided for the democratization and integration processes of Albania,” according to a statement released by his office.

“We are doubling down on traditional journalistic values, on fairness, on facts because we believe that in the end, people recognize the truth,” said Director Bennett during her speech at the “Media Meets Literacy” conference in Sarajevo, Bosnia. “The truth is the best propaganda and lies are the worst. To be persuasive, we must be believable. To be believable, we must be credible. To be credible, we must be truthful and it’s as simple as that,” said Bennett quoting notable American journalist, the late Edward R. Murrow.

VOA’s Albanian service broadcasts to Albania, Kosovo and the Albanian-speaking areas of Macedonia, Serbia and Montenegro. The service reaches more adults than any other international broadcaster in the region with programming widely disseminated by local media on television and the internet. VOA Serbian broadcasts to more than 10 million Serbs in Serbia, Montenegro, Kosovo, Bosnia-Herzegovina, Croatia, and Macedonia. The service continues to be the leading international broadcaster in the area and a source of objective and accurate information about the region, the U.S. and the world. Through its varied, multimedia programming, with a focus on television, VOA Bosnian reaches a large regional audience in Bosnia-Herzegovina, the southern parts of Serbia and parts of Kosovo, as well as throughout Western Europe to the Bosnian diaspora.